Guides on how to create, improve and maintain Models in Re:infer, using platform features such as Discover, Explore and Validation

Please note that this feature is only available to certain users with a technical background. Please contact support to discuss access.

A Custom Regex Entity can be used to extract and format spans of text that have a known repetitive structure, such as IDs or reference numbers.

A Custom Regex Entity is made up of one or more Custom Regex Templates. Each template expresses one way to extract (and format) the entity. Combined together, these templates offer a flexible and powerful way to cover multiple representations of the same entity type.

A template is made of two parts:

For instance, if your customer IDs can be either the word “ID” followed by 7 digits, or an alphanumeric string of 9 characters, here is what your two templates will look like: 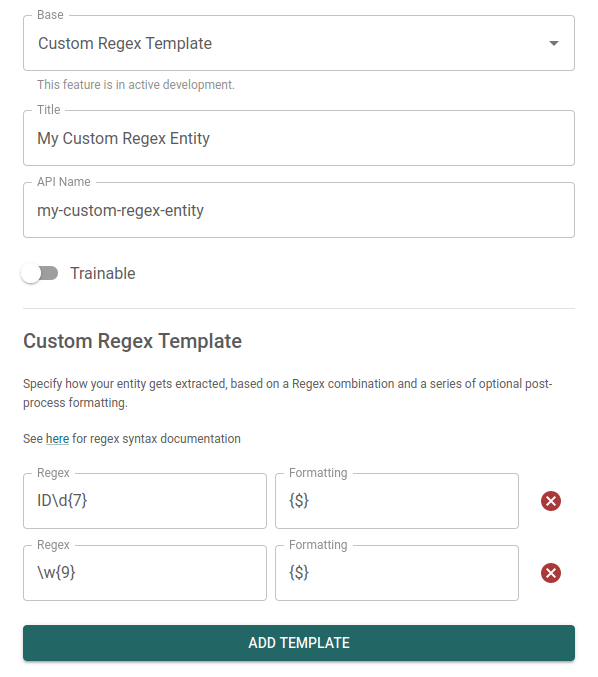 The regex is the pattern used to extract entities in the text. See here for the syntax documentation.

Named capture groups can be used to identify a specific section of the extracted string for subsequent formatting. The names of the capture groups should be unique across all templates, and should only contain lowercase letters or digits.

Formatting can be provided to post-process the extracted entity.

By default, no formatting is applied and the string returned by Re:infer will be the string extracted by the regex. However, if needed, more complex transformations can be defined, using the following rules.

Any named capture group defined in the regex will be available to use in the formatting logic as a variable, prefixed with the $ symbol. Note that the $ symbol by itself represents the full regex match.

Variables can then be used in the formatting string to insert the corresponding extracted span into the value returned by Re:infer; the variable name needs to be surrounded by { and } braces.

For instance, if we want to extract seven digits as an ID, and return these seven digits prefixed with ID- then the regex and the formatting would be:

Or, using a named capture group:

Some functions can also be used in the formatting to transform the extracted string. The names of the functions and their signatures are inspired by Excel.

Converts all characters in the extracted span to uppercase:

Converts all characters in the extracted span to lowercase:

Pads the extracted span up to a given size with a given character.

Returns the first n characters from the span.

Returns the last n characters from the span.

Returns n characters after the specified position from the span.